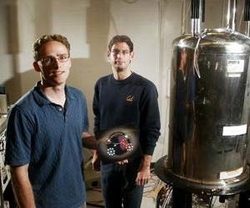 The MRI machine that most doctors use to get three-dimensional images of everything from strained knee ligaments to ovarian cysts could become 10,000 times more sensitive with a xenon gas technique devised at Lawrence Berkeley Laboratory.

The boost in resolution would allow doctors to track biological processes at the molecular level and could be extremely useful for diagnosing early stages of cancer or heart disease. "If it works as well as we hope it will, it will be a significant advance in cancer detection," said chemist David Wemmer, a member of the team at Berkeley Lab and UC Berkeley that developed the imaging technique. Their findings were published Thursday in the journal Science.

Wemmer and his colleagues found a way to use xenon atoms to highlight specific types of molecules, such as the proteins found on the outside of cancer cells, in very low
concentrations.

Conventional magnetic resonance imaging, or MRI, isn't sensitive enough to see cancerous cells until a fair amount of them have accumulated. The xenon amplifies the signal of these cells, allowing them to be seen more easily.

"The key to really diagnosing disease earlier and earlier is to start to look at the differences in the molecular expression that's taking place," said atomic physicist Bastiaan Driehuys at Duke University Medical Center. "It's thought that we'll see things earlier, and we'll be much more sensitive than if you wait until there's some functional or anatomical consequence of these molecular processes." The xenon technique can also image several different types of molecules at the same time, which is also very beneficial for diagnosing specific types of cancer." The best analogy is if you were able to look with your eye, it would be the equivalent of having several different colors," Wemmer said. "With conventional magnetic resonance imaging that's already used widely for cancer detection, there's no way of making multiple colors. Even if you can tell a tissue is cancerous, sometimes there are many different types of cancer in the same organ."

Because different types of cancer respond better to different treatments, knowing the specific cancer type would help doctors choose the most effective treatment for a patient.

Conventional MRI uses a magnet to detect hydrogen atoms inside of water molecules in the body's tissues. The atoms flip to line up with the magnetic field. The image relies on more atoms flipping upward than flipping downward relative to the field. This difference is very small, typically one extra flipped-up atom for every 100,000 atoms, so a very large number of water molecules are needed to create an image. Xenon atoms can be "hyperpolarized" by hitting them with polarized light, so that there are between 10 and 100,000 times more flipped-up atoms. This makes xenon very easy for MRI machines to detect.

The trick is that the cages turn off the xenon atom's signal, leaving a dark spot in the middle of all the other xenon atoms that are lit up and giving away the presence of the cancerous cells.

They have only tested the method on a model system made of water and beads that mimic human tissue, but have hope the results will work in people some day. The patient would be injected with molecular cages designed to catch whatever type of molecule needs to be found, and then would inhale xenon gas before entering the MRI machine.

"We have a long way to go for doing it in a human in a clinic," Wemmer said. "But we can extrapolate that it's reasonable to think we can do it."

Driehuys agrees that the technique has a good chance of working in humans. "I think it may take a decade, but it really has legs on it from where I'm standing."