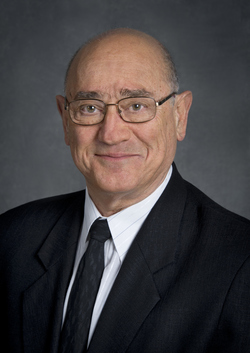 Alexander Pines was born in 1945. He grew up in Rhodesia (now Zimbabwe) where his lifelong passion for science, music and chess was fostered. He then went to Israel to study mathematics and chemistry at the Hebrew University of Jerusalem, graduating with a B.Sc. in 1967. In 1968, Alex came to MIT, where he obtained his Ph.D. in chemical physics in 1972 and joined the Berkeley Faculty in the same year. He was promoted to Associate Professor in 1975 and to Professor in 1980. He is currently the Glenn T. Seaborg Professor of Chemistry at Berkeley, a Senior Scientist in the Materials Sciences Division of the Lawrence Berkeley National Laboratory and a Faculty Affiliate at QB3--the California Institute for Quantitative Biomedical Research. He is married to Ditsa Pines and has five children and six grandchildren.

Pines is a pioneer in the development and applications of nuclear magnetic resonance (NMR) spectroscopy, originally in solid-state NMR. Together with the great John S. Waugh, he demonstrated time-reversal of dipole-dipole couplings in many-body spin systems, and introduced cross polarization and high-resolution NMR (proton-enhanced nuclear induction spectroscopy) of dilute spins such as carbon-13, nitrogen-15 and silicon-29 in solids, thereby helping to launch the era of modern solid-state NMR in chemistry. The 1973 paper “Proton enhanced NMR of dilute spins in solids” has been cited more than 2000 times.

At Berkeley, Pines introduced multiple-quantum spectroscopy, zero-field NMR, broadband and adiabatic sech/tanh pulses for MRI, double rotation and dynamic-angle spinning of quadrupolar nuclei, and iterative maps for quantum control. He developed methods that combine of optical pumping and cross-polarization to observe the selective "lighting up" of surface and solution NMR and magnetic resonance imaging (MRI) by means of laser-polarized xenon. He is currently engaged in the development of novel spin polarization methods, ex situ and mobile NMR and MRI, targeted NMR sensors for molecular imaging, ultralow and zero-field NMR and MRI, detection of magnetic resonance amplified by means of laser magnetometers, and miniaturization of NMR, including its combination with microfluidic (“lab on a chip”) technologies. Techniques he has developed have been widely adopted to investigate molecular structure and organization, and have had substantial impact in chemistry, materials science and biomedicine.

Pines has received the Langmuir Medal of the American Chemical Society and the Faraday Medal of the Royal Society of Chemistry; he is a member of the U.S. National Academy of Sciences and a Foreign Member of the Royal Society (London) and the Indian Academy of Sciences; among his lectureships, Pines has been Hinshelwood Professor at the University of Oxford, Lord Todd Professor at the University of Cambridge, Loeb Lecturer in Physics at Harvard University and inaugural John D. Roberts Lecturer at the California Institute of Technology; he is past president of the International Society of Magnetic Resonance; in 1991 he was awarded the Wolf Prize for Chemistry (together with Richard R. Ernst.)

An educator and mentor of undergraduate and Ph.D. students as well as postdoctoral fellows, Pines has been awarded numerous teaching honors, including the University of California’s Distinguished Teaching Award and the Robert Foster Cherry Great Teacher Award at Baylor University.

Over two hundred self-dubbed “Pinenuts” have passed through his laboratory, graduating to research, teaching and other creative activities worldwide.