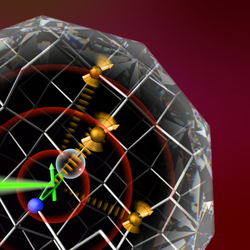 Today’s nuclear magnetic resonance (NMR) and Magnetic Resonance Imaging (MRI) technologies, like quantum information processing and nuclear spintronic technologies, are based on an intrinsic quantum property of electrons and atomic nuclei called “spin.” Electrons and nuclei can act like tiny bar magnets with a spin that is assigned a directional state of either “up” or “down.” NMR/MRI signals depend upon a majority of nuclear spins being polarized to point in one direction. The greater the polarization, the stronger the signal. Researchers with the U.S. Department of Energy (DOE)’s Lawrence Berkeley National Laboratory (Berkeley Lab) have reported on a technique for hyperpolarizing carbon-13 nuclear spins in diamond that enhances the sensitivity of NMR/MRI by many orders of magnitude above what is ordinarily possible with conventional NMR magnets at room temperature.

As part of a collaboration between the research groups of Alexander Pines of Berkeley Lab’s Materials Sciences Division, and Dmitry Budker of Berkeley Lab’s Nuclear Sciences Division, Vikram Bajaj led the demonstration of the first magnetically-controlled nearly complete hyperpolarization of the spins of carbon-13 nuclei located near synthetic defects in diamond crystals. The work builds upon earlier research by several groups worldwide including those of Budker and Berkeley Lab’s Jeffrey Reimer. This spin hyperpolarization can be carried out with refrigerator-style magnets, resulting in predictable and robust control of carbon-13 hyperpolarization. The methodology suggests a route by which the sensitivity of generic NMR and MRI experiments can be enhanced in applications related to molecular and biomolecular detection, diamond-based quantum information processing, and nuclear spintronics.

“The nearly complete polarization of the spin of carbon-13 nuclei is ideal for any process that requires a pure initial spin state,” says Bajaj, who also holds an appointment with the University of California (UC) Berkeley as a project scientist for the California Institute for Quantitative Biosciences (QB3). “More importantly, our method should be applicable in any situation where hyperpolarized bulk atomic nuclei are required, including dynamic nuclear polarization-enhanced NMR and spintronic devices.”

Bajaj, a senior scientist in Pines’ research group, is the corresponding author of a paper describing these results published in the journal Nature Communications. The paper is titled “Sensitive Magnetic Control of Ensemble Nuclear Spin Hyperpolarization in Diamond.” In addition to Bajaj and Pines, other co-authors were Hai-Jing Wang, Chang Shin, Claudia Avalos, Scott Seltzer and Dmitry Budker.

Over several decades Pines and members of his research group have developed numerous ways to hyperpolarize the spins of atomic nuclei. Their efforts have yielded NMR/MRI signals that are 10,000 times stronger than those seen in conventional NMR/MRI experiments. In several applications, they have also been able to record analytically detailed magnetic resonance spectra in the absence of any magnetic field. In this latest effort, Pines and Bajaj capitalized on a diamond impurity called a nitrogen-vacancy (NV) center, in which optical and spin degrees of freedom are coupled.

The crystal of a pure diamond is a three- dimensional lattice of carbon atoms, each of which is bonded to four of its neighbors. An NV center is created when two adjacent carbon atoms are removed from the lattice leaving two gaps, one of which is filled with a nitrogen atom, and one of which remains vacant. This leaves unbound electrons in the center between the nitrogen atom and the vacancy that give rise to unique and well-defined electron spin polarization states.

“For efficient spin transfer, the energy structure of the source and sink must be matched,” says Hai- Jing Wang, lead author of the Nature Communications paper. “In this case, the electron energy levels become matched with the nuclei at 0.1 Tesla, which is what we provided with our external magnet. This produces a degeneracy condition that increases the rate of the polarization transfer from NV electrons to nearby carbon nuclei.”

The NV center and the adjacent carbon nuclei are promising candidates as qubits. Like electrical charge, quantum spin can be used to encode data, with up or down spin being analogous to the 0s and 1s that are now encoded in charge. However, unlike charge, which is either present or not, spin can be up, down or both, thanks to another quantum effect called “superposition.” Through superpositioning, qubits can store exponentially more data and process it billions of times faster than classical computer bits.

“The conventional ways of controlling nuclear spin require oscillating electromagnetic fields, making it difficult to achieve high spatial resolution,” Wang says. “Spin control via an optical pattern and static magnetic field provides a much simpler way to address a set of NV centers in diamond. Even the existing technologies used in computer hard drives today have sufficient spatial resolution and variation in the magnetic field strength to implement such control schemes.”

The authors believe that the hyperpolarization of carbon-13 nuclei near NV centers can easily diffuse to the rest of carbon nuclei in the diamond via a spin diffusion mechanism.

Says Pines, “It should also be possible to detect and to hyperpolarize nuclear spins outside the diamond if the external spins are in dipolar contact with the hyperpolarized carbon nuclei at the surface of the diamond. We previously demonstrated analogues of this approach using optically polarized xenon gas.”

Says Bajaj, “We’re now attempting to polarize spins external to diamond. If successful, we will have a chip-scale device that is capable of polarizing arbitrary samples for NMR experiments. Since both diamond and magnet can potentially be scaled down to micron size or below, it may even be possible to fabricate a solid state nuclear polarizer on a microfluidic chip.”

This research was supported by the DOE Office of Science.