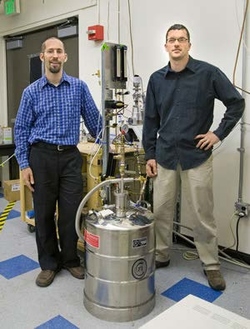 BERKELEY, CA — In a significant step towards improving the design of future catalysts and catalytic reactors, especially for microfluidic “lab-on-a-chip” devices, researchers with the U.S. Department of Energy’s Lawrence Berkeley National Laboratory (Berkeley Lab) and the University of California (UC) at Berkeley, have successfully applied magnetic resonance imaging (MRI) to the study of gas-phase reactions on the microscale.

Under the leadership of Alexander Pines, faculty senior scientist in Berkeley Lab’s Materials Sciences Division and the Glenn T. Seaborg Professor of Chemistry at UC Berkeley, a team of researchers that included chemists Louis Bouchard and Scott Burt have developed a technique in which parahydrogen-polarized gas is used to make an MRI signal strong enough to provide direct visualization of the gas-phase flow of active catalysts in packed-bed microreactors. This work, the first application of gas-phase MRI to microfluidic catalysis, shows that parahydrogen-enhanced MRI can be used to track gases and liquids in microfluidic devices as well as in the void spaces of a tightly packed catalyst reactor bed.

“This is the first time hyperpolarized gas has been used to directly study catalytic reaction products on such a small scale and without the use of tracer particles or gas,” says Bouchard. “It opens the door for future studies of heterogeneous catalysis in which all the unique benefits of MRI, such as velocimetry and spatially dependent quantities, are available.”

Adds Burt, “Furthermore, our results indicate that our approach to using parahydrogen can be extended to other chemical reactions beyond hydrogenation, which significantly broadens the impact and potential use of our technique.”

Pines, Bouchard and Burt are the co-authors of a paper published in the January 25, 2008 edition of the journal Science, describing this research. The paper is entitled: “NMR Imaging of Catalytic Hydrogenation in Microreactors with the Use of para-Hydrogen.” Other co-authors of this paper were Sabieh Anwar, who is a former member of Pines’ research group now at Lahore University, Pakistan, and Kirill Kovtunov and Igor Koptyug, from the International Tomography Center, Novosibirsk, Russia, who are experts in catalysis and the use of MRI to study catalytic processes.

Commenting on the Science paper, Jeffrey Reimer, who chairs the UC Berkeley Chemical Engineering Department, said, “The spatial and temporal distribution of reactants and products in heterogeneous systems has not been visited by researchers in recent years owing to the lack of quantitative measures in situ. So while the sophistication of mathematical modeling of such systems proceeds at the rate at which computational power increases, the relevance of such models is dubious since they cannot be compared with measurements other than bulk properties of temperature, conversion, etc. The methods and data presented in this paper portend a new era of measurement, modeling, and design for more efficient reactors.”

Since nearly all manufacturing processes that involve chemistry start with a catalytic reaction, there is a premium on the design of new and better catalysts and catalytic reactors. This is especially true for the growing field of microfluidic chip technology. MRI and nuclear magnetic resonance (NMR), its sister technology, are among the most powerful analytic tools known to science and could be immensely valuable for characterizing catalytic reactors and reactions in microfluidic devices. However, the low sensitivity of conventional MRI/NMR techniques has limited their applicability to microscale catalysis research.

For the results reported in their Science paper, Pines, Bouchard and Burt were able to overcome the inherent low sensitivity of MRI/NMR through the use of parahydrogen.

MRI/NMR signals are made possible by a property found in the atomic nuclei of almost all molecules called “spin,” which gives rise to a magnetic moment, meaning the nuclei act as if they were bar magnets with a north and south pole. Obtaining an MRI/NMR signal depends upon an excess of nuclei in a sample with spins pointing in one direction or the other.

At standard temperature and pressure, hydrogen gas exists in one of two molecular forms – ortho and para – with the former making up about 75-percent of the mixture. Both molecular forms are diatomic, but in orthohydrogen, the spins of the two protons in the nuclei are pointed in the same direction, whereas in parahydrogen, the spins of the two protons point in opposite directions. By increasing the fraction of parahydrogen in the gas mixture there is a net excess in the para spin state even at room temperature and in the complete absence of a magnetic field. Under the right conditions, this hyperpolarization can be passed on to other nuclei and used to substantially boost the strength of their MRI/NMR signals by several orders of magnitude.

Pines, Bouchard and Burt have found a way to use parahydrogen enhanced gas in combination with propylene gas and a heterogenized catalyst to achieve a strong MRI/NMR signal from samples in the gas-phase, something that has only been done before using hyperpolarized noble gases and expensive polarization equipment. A mixture of propylene and parahydrogen enriched gas (about 40-percent parahydrogen) is flowed through a reactor cell containing a catalyst (Wilkinson’s catalyst) that’s been immobilized on a modified silica gel. As the parahydrogen enhanced gas mixture passes over the catalyst, hydrogenation takes place. This produces spin polarized propane gas that is transferred to an MRI/NMR magnet. The catalyst-free hyperpolarized propane gas can then be used to enhance MRI/NMR signals.

“The enhanced MRI/NMR sensitivity provided by parahydrogen induced polarization allows us to overcome the inherent problem of low sensitivity in thermally polarized gas-phase MRI/NMR,” says Bouchard. “This is the reason we are able to get such high-spatial resolution MRI images in the gas phase. Using conventional thermally-polarized MRI/NMR signals, this would be an impossible task.”

It has been a persistent challenge for scientists and engineers who study catalysts to correlate active catalytic regions with overall morphology in heterogeneous catalyst beds. It has also been a challenge to monitor the multistep reactions that take place within the beds. This has hampered the design of catalytic reactors that give optimal performances.

Says Burt, “Our MRI/NMR technique provides the ability to directly measure the spatial dependence of conversion and allows one to do a reality check on any simulations or assumptions used to design a catalytic reactor. Design can therefore become an iterative process that converges on an optimal performance.”

The costs of researching and developing new catalysts can be very expensive, and the parahydrogen-enhanced MRI/NMR technique developed by Pines, Bouchard, Burt and their collaborators has the potential to significantly reduce these costs, as well as substantially speed up the process.

Not only does it allow future studies of potential catalysts to be carried out on a smaller and more economical scale, it is also well-suited for “green chemistry,” the new approach that seeks to maximize productivity and yield while minimizing costs, amounts of reactants and waste products. Pines, Bouchard and Burt say their technique is ready to be used in the study of hydrogenation reactions now. In the future, they would like to extend its applications beyond hydrogenation to study other types of catalysts and chemical reactions.

Says Bouchard, “We also have new ideas on how to get high-resolution temperature and pressure maps of the catalyst bed that will convey information about the energetics of the chemical reaction and mechanics of fluid transport during the reaction.

Says Burt, “This would be very exciting as there are few existing techniques that provide such information apart from simulations. And for microreactors, there is simply no competing method for studying such gas-phase reactions at this level of detail and spatial resolution.”