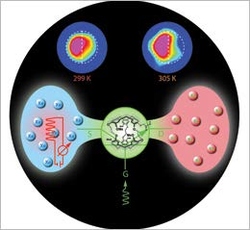 Standard magnetic resonance imaging (MRI) is a superb diagnostic tool; however, it suffers from low sensitivity, requiring patients to remain motionless for long periods of time inside noisy, claustrophobic machines.

A promising new MRI method that is much faster, more selective — able to distinguish even among specific target molecules — and many thousands of times more sensitive has now been developed in the laboratory by researchers at the Department of Energy's Lawrence Berkeley National Laboratory (LBNL) and the University of California at Berkeley (UCB).

The key to the new technique is called "temperature-controlled molecular depolarization gates." It builds on a series of previous developments in MRI and the closely related field of nuclear magnetic resonance (or NMR, which instead of an image yields a spectrum of molecular information), by members of the laboratories of Alexander Pines and David Wemmer at LBNL and UCB. Pines is the Glenn T. Seaborg Professor of Chemistry at UCB and a senior scientist in LBNL's Materials Sciences Division. Wemmer is Professor of Chemistry at UCB and a member of LBNL's Physical Biosciences Division.

The technique was developed by a team of past and present Pines and Wemmer lab members headed by Leif Schröder of LBNL's Materials Sciences Division and includes Lana Chavez, Tyler Meldrum, Monica Smith, and Thomas Lowery.

The researchers outlined their results in the international edition of the journal Angewandte Chemie.

"The new method holds the promise of combining a set of proven NMR tools for the first time into a practical, supersensitive diagnostic system for imaging the distribution of specific molecules on such targets as tumors in human subjects," said lead author Schröder, "or even on individual cancer cells."

MRI and NMR make use of the quantum-mechanical phenomenon known as nuclear spin. Nuclei with odd numbers of protons or neutrons have net magnetic moment and will orient themselves like tiny bar magnets, spin "up" or spin "down," in a strong magnetic field. If the spinning nuclei are knocked off axis by a jolt of radio-frequency (RF) energy, they wobble or precess at a characteristic rate, a rate that is strongly conditioned by their immediate chemical neighbors. During a certain relaxation time (typical of each atomic species in a specific environment), the nuclei reorient themselves and emit a radio signal that reveals both their position and their chemical surroundings.

The spin-up state requires fractionally less energy, so there is typically a slight excess of spin-up nuclei, about one in a hundred thousand (0.001 percent), and it's this tiny difference that yields a useful signal. In clinical settings, MRI is usually done using hydrogen nuclei, protons, which are ubiquitous in the human body. But other nuclear species, notably the noble gas xenon, offer advantages over hydrogen that in the case of xenon include a virtual absence of background signal, since there is no xenon in biological systems.

Xenon is particularly useful in MRI and NMR because the spins of its nuclei are readily polarized, in a process involving contact with rubidium vapor irradiated with a laser beam. In such "hyperpolarized" xenon, the excess of spin-up nuclei can be as much as 20 percent, which gives a far stronger signal than hydrogen's 0.001 percent spin-up excess. Moreover, hyperpolarized xenon has a much longer relaxation time than hydrogen.

Now add the ability to associate a single xenon nucleus with a specific molecular target, for example, a protein or sugar on the surface of a cancer cell. To do this, the Pines and Wemmer labs have created biosensors equipped with cages that take up and hold on to xenon atoms; the cages, molecules called cryptophanes, are linked to ligands that target specific molecules of interest. Xenon biosensors engineered with several different ligands can be used at the same time; once in place, biosensors carrying hyperpolarized xenon can localize the MRI signals from a range of different molecules on the target.

The final advance underlying the new technique is called Hyper-CEST: hyperpolarized xenon chemical-exchange saturation transfer. While biosensors can bring the xenon to specific molecular targets, in realistic applications relatively few of these are present, only about one percent compared to the total amount of free xenon injected near that target. The signal from the polarized xenon inside the biosensor cages is consequently much fainter than that from the uncaged polarized xenon nearby.

"About 60 percent of the biosensor cages are filled with xenon," said Schröder, "but the problem is, you get only a tiny, broad NMR signal from the xenon when it is inside the cage. On the other hand, you have thousands of xenon nuclei just sitting around the cage."

The trick then is to depolarize the xenon nuclei in the immediate vicinity of the cages, which will serve to outline the target in high contrast against the surrounding hyperpolarized xenon pool. This is done through chemical exchange, as xenon atoms are constantly entering and leaving the biosensor cages.

Because it produces a much stronger signal, Hyper-CEST acquires images thousands of times faster than imaging the caged xenon directly. Yet it retains the great advantages of cryptophane biosensors, including their ability to "multiplex," or detect different targets at the same time.

"Slight differences in cage composition, involving only a carbon atom or two, affect the frequency of the signal from the xenon and produce distinct peaks in the NMR spectrum," said team member Tyler Meldrum of the Materials Sciences Division. "If we design different cages for different xenon frequencies, we can put them all in at once and, by selectively tuning the RF pulses, see peaks at the frequencies corresponding to each kind of cage."

The processes described above — hyperpolarizing the xenon, caging it in biosensors, and building up depolarized xenon in the immediate vicinity of the target through chemical exchange and selective bursts of rf radiation — led to the development of Hyper-CEST MRI. But until now, Hyper-CEST MRI has only been tested at room temperature.

Using biosensor cages as temperaturecontrolled molecular depolarization gates makes Hyper-CEST MRI possible at a range of higher-than-room temperatures. Because the technique regulates the exchange rate of hyperpolarized-todepolarized nuclei through the cages, biosensors regulated this way
have been nicknamed "transpletors," by analogy to the transistors that act as gates for the flow of electrons from source to drain in electronic systems.

Hyper-CEST at a range of temperatures has many advantages. Most basic is that biomedical MRI must operate at body temperature.

Aside from this practical consideration, temperature determines the rates at which different kinds of cryptophane-cage hosts react with their xenon-atom guests. And increasing temperature dramatically increases chemical exchange rates.

"At room temperature, a xenon atom will stay approximately 50 milliseconds inside the cage before it leaves again," said team member Monica Smith, of LBNL's Physical Biosciences Division. "Approaching body temperature, the time inside the cage decreases by at least factor of 10."

The ability to achieve high-contrast images, multiplexed to identify a range of molecular targets, and to do so in a short time, offers many benefits to patients and physicians.

Enabling fast, sensitive, moleculespecific NMR and MRI in humans and other living subjects is perhaps the most evident advantage of the new technique, but possible applications don't end there.

For example, the method offers a better way to study chemical exchange in nanostructures like zeolites, which are important in catalysis, or in versatile carbon nanotubes. Temperature controlled depolarization is a breakthrough for NMR and MRI that will find uses in a variety of fields.