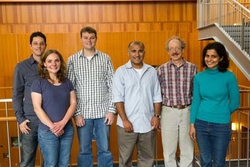 For years, researchers have been trying to blend the analytical power of magnetic resonance imaging (MRI) with the versatility of microarrays, but were stymied by serious technical barriers, including the difficulties of detecting a faint signal from small targets. A series of innovations from scientists at Lawrence Berkeley National Laboratory, Berkeley, Calif., has resulted in the Magnetic Resonance Microarray Imaging (MRMI) technology, which makes nuclear magnetic resonance (NMR) analysis of microfluidic devices possible and will enable laboratory tests to be conducted near the point of care.

Portable MRMI is the result of three converging Berkeley Lab technologies: laser polarization of xenon and use of xenon biosensors, remote detection and compressive sampling, and optical sensing. Dilute, hyperpolarized xenon gas, which produces a strong NMR signal, is dissolved within a sample of the analytical fluid placed at the device input. Flow of the liquid is tracked along microscopic channels by following the strong signal of the xenon dissolved within it. The fluid passes through an array of anchored chemical sensors, each made to bind to a particular analyte. If the analyte is present, the embedded sensors will alter the xenon signal in a way that is detectable by the MRMI apparatus. The system’s parallel architecture gives it the potential to image up to 100,000 separate channels on a 3 cm chip. A different sensor can be embedded in each of the many channels of the microarray, so that many different analytes can be tested at once.