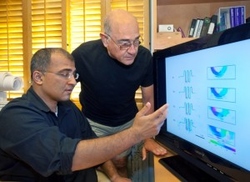 “Better and faster results!” is the clarion call for scientists and engineers to continually strive to improve their research tools. Of the tools used to study material structures at the atomic and molecular scales, there is none finer than Nuclear Magnetic Resonance (NMR) spectroscopy and its daughter technology Magnetic Resonance Imaging (MRI). Now, the latest development from the research group of one of the word’s foremost authorities on NMR/MRI technology promises NMR/MRI results that are better and faster than ever before – a million times faster!

Through a combination of remote instrumentation, JPEG-style image compression algorithms and other key enhancements, chemist Alexander Pines and members of his research group have been able to use NMR/MRI to image materials flowing through microfluidic “lab-on-a-chip” devices and zoom in on microscopic objects of particular interest with unprecedented spatial and time resolutions. Pines holds joint appointments with the Lawrence Berkeley National Laboratory (Berkeley Lab) and the University of California (UC) at Berkeley.

“What excites me most about this new methodology is the possibility of a mobile, chip-based NMR/MRI platform for microfluidic analysis. Who knows? This might turn out to be useful for chemistry and biomedicine,” says Pines, an internationally recognized leader in the development of NMR technology, who is a faculty senior scientist in Berkeley Lab’s Materials Sciences Division and the Glenn T. Seaborg Professor of Chemistry at UC Berkeley.

This latest work, which focused on MRI, has been reported in the journal Science in a paper titled “Zooming in on Microscopic Flow by Remotely Detected MRI.” Co-authoring the paper with Pines were Vikram Bajaj, who is still a member of the Pines’ group, plus Jeffrey Paulsen, now of Schlumberger-Doll Research, and Elad Harel, now at the University of Chicago.

Says Bajaj, first author on the Science paper, “We have been able to conclusively demonstrate the ability to record microscopic images of flowing macroscopic objects without loss of sensitivity, something that is impossible in conventional MRI. We were also able to illustrate how MRI can be used to measure flow dynamics quantitatively and with high spatial resolution in real microfluidic devices. The spatial resolution we achieved is sufficient to capture the results of hundreds or thousands of parallel assays on a microfluidic device. Furthermore, we recorded these images approximately one million times faster than could be done with a conventional MRI experiment. This means that experiments which would have taken years to complete are now practical considerations.”

NMR/MRI signals are made possible by a property found in the atomic nuclei of almost all molecules called “spin,” which makes the nuclei act as if they were bar magnets. Obtaining an NMR/MRI signal depends upon an excess of nuclei in a sample with spins pointing either “north” or “south.” In the signal- encoding phase of NMR/MRI, the nuclei are exposed to a magnetic field and subjected to radiofrequency pulses so that they absorb and re- emit energy at signature frequencies. In the signal-detection phase of NMR/MRI, the frequencies of the encoded signals are either directly measured to obtain a spectrum (NMR), or used to obtain a second, spatially encoded signal that can then be translated into images (MRI).

MRI has become a staple of modern medicine, providing physicians with a diagnostic tool that is noninvasive, quick, and involves no ionizing radiation that can damage cells and tissue. However, conventional MRI requires huge doughnut-shaped machines that fill an entire room and are extremely expensive to purchase and operate. In recent years, Pines and his group have taken great strides towards making NMR/MRI technology compact, portable and relatively inexpensive. It started with the decoupling of the NMR/MRI signal encoding and signal detection processes, which made remote NMR/MRI possible and opened the technology to lab-on-a-chip microfluidic assays of gases and liquids. With these new developments, Pines and his group have laid the foundation for new NMR/MRI applications in portable chemical and biomedical analysis.

“Our goal is to develop NMR/MRI appliances for portable chemical analysis of complex mixtures, including blood, urine, and saliva,” Bajaj says. “Ultimately, we would like to make it possible to use NMR/MRI in point of care clinical analysis.”

In their new Science paper, Pines and Bajaj and their co-authors describe how they were able to apply MRI technology to studies involving microscopic flow through microfluidic or biological channels, or through porous materials. The key was the integration of several new elements into their remote NMR/MRI configuration. This included the fabrication of microsolenoid MRI probes with demountable microfluidic device holders, the design of remote MRI sequences for spatial encoding in the presence of motion, as well as for velocimetric measurements, and the use of JPEG-style compressive sampling algorithms for accelerated image encoding.

“The combination of remote NMR/MRI methods with these new elements spectroscopically mimics the implantation of a coil around a microscopic feature of interest and allows us to zoom in on the microscopic details of microfluidic flow dynamics in three spatial dimensions,” says Bajaj. “The mechanism of remote detection is analogous to that of a magnetic recording tape on which complex data are first encoded and later read out by a single stationary detector as the tape advances.”

This work is supported by the U.S. Department of Energy’s Office of Science, and by a gift from the Agilent Technologies Foundation. Berkeley Lab is a U.S. Department of Energy national laboratory located in Berkeley, California. It conducts unclassified scientific research for DOE’s Office of Science and is managed by the University of California.