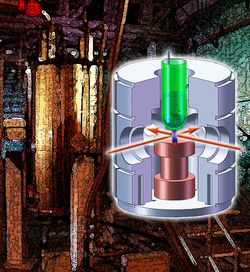 Nuclear magnetic resonance (NMR), a scientific technique associated with outsized, very low- temperature, superconducting magnets, is one of the principal tools in the chemist’s arsenal, used to study everything from alcohols to proteins to such frontiers as quantum computing. In hospitals the machinery of NMR’s cousin, magnetic resonance imaging (MRI), is as loud as it is big, but nevertheless a mainstay of diagnosis for a wide range of medical conditions.

It sounds like magic, but now two groups of scientists at Berkeley Lab and UC Berkeley, one expert in chemistry and the other in atomic physics, long working together as a multidisciplinary team, have shown that chemical analysis with NMR is practical without using any magnets at all.

Dmitry Budker of Berkeley Lab’s Nuclear Science Division, a professor of physics at UC Berkeley, is a protean experimenter who leads a group with interests ranging as far afield as tests of the fundamental theorems of quantum mechanics, biomagnetism in plants, and violations of basic symmetry relations in atomic nuclei. Alex Pines, of the Lab’s Materials Sciences Division and UCB’s Department of Chemistry, is a modern master of NMR and MRI. He guides the work of a talented, ever-changing cadre of postdocs and grad students known as the “Pinenuts” – not only in doing basic research in NMR but in increasing its practical applications. Together the groups have extended the reach of NMR by eliminating the use of magnetic fields at different stages of NMR measurements, and have finally done away with external magnetic fields entirely.

NMR and MRI depend on the fact that many atomic nuclei possess spin (not classical rotation but a quantum number) and – like miniature planet Earths with north and south magnetic poles – have their own dipolar magnetic fields. In conventional NMR these nuclei are lined up by a strong external magnetic field, then knocked off axis by a burst of radio waves. The rate at which each kind of nucleus then “wobbles” (precesses) is unique and identifies the element; for example a hydrogen-1 nucleus, a lone proton, precesses four times faster than a carbon-13 nucleus having six protons and seven neutrons.

Being able to detect these signals depends first of all on being able to detect net spin; if the sample were to have as many spin-up nuclei as spin-down nuclei it would have zero polarization, and signals would cancel. But since the spin-up orientation requires slightly less energy, a population of atomic nuclei usually has a slight excess of spin ups, if only by a few score in a million.

“Conventional wisdom holds that trying to do NMR in weak or zero magnetic fields is a bad idea,” says Budker, “because the polarization is tiny, and the ability to detect signals is proportional to the strength of the applied field.”

The lines in a typical NMR spectrum reveal more than just different elements. Electrons near precessing nuclei alter their precession frequencies and cause a “chemical shift” — moving the signal or splitting it into separate lines in the NMR spectrum. This is the principal goal of conventional NMR, because chemical shifts point to particular chemical species; for example, even when two hydrocarbons contain the same number of hydrogen, carbon, or other atoms, their signatures differ markedly according to how the atoms are arranged. But without a strong magnetic field, chemical shifts are insignificant.

“So why do it?” asks Micah Ledbetter of Budker’s group. It’s a rhetorical question. “The main thing is getting rid of the big, expensive magnets needed for conventional NMR. If you can do that, you can make NMR portable and reduce the costs, including the operating costs. The hope is to be able to do chemical analyses in the field – underwater, down drill holes, up in balloons – and maybe even medical diagnoses, far from well-equipped medical centers.”

“As it happens,” Budker says, “there are already methods for overcoming small polarization and low detection efficiency, the first two objections to low- or zero-field NMR. By bringing these separate methods together, we can tackle the third objection – no chemical shift – as well. Zero-field NMR may not be such a bad idea after all.”

Net spin orientation can be increased in various ways, collectively known as hyperpolarization. One way to hyperpolarize a sample of hydrogen gas is to change the proportions of parahydrogen and orthohydrogen in it. Like most gases, at normal temperature and pressure each hydrogen molecule consists of two atoms bound together. If the spins of the proton nuclei point in the same direction, it’s orthohydrogen. If the spins point in opposite directions, it’s parahydrogen.

Parahydrogen can be enhanced to 50 percent or even 100 percent using very low temperatures, although the right catalyst must be added or the conversion could take days if not weeks. Then, by chemically reacting spin-zero parahydrogen molecules with an initial chemical, net polarization of the product of the hydrogenation may end up highly polarized. This hyperpolarization can be extended not only to the parts of the molecule directly reacting with the hydrogen, but even to the far corners of large molecules. The Pinenuts, who devised many of the techniques, are masters of parahydrogen production and its hyperpolarization chemistry.

“With a high proportion of parahydrogen you get a terrific degree of polarization,” says Ledbetter. “The catch is, it’s spin zero. It doesn’t have a magnetic moment, so it doesn’t give you a signal! But all is not lost....”

And now for the magic

Optical-atomic magnetometers are based on a different principle – one that, curiously, is something like NMR in reverse, except that optical-atomic magnetometers measure whole atoms, not just nuclei. Here, an external magnetic field is measured by measuring the spin of the atoms inside the magnetometer’s own vapor cell, typically a thin gas of an alkali metal such as potassium or rubidium. Their spin is influenced by polarizing the atoms with laser light; if there’s even a weak external field, they begin to precess. A second laser beam probes how much they’re precessing and thus just how strong the external field is.

Budker’s group has brought optical-atomic magnetometry to a high pitch by such techniques as extending the “relaxation time,” the time before the polarized vapor loses its polarization. In previous collaborations, the Pines and Budker groups have used magnetometers with NMR and MRI to image the flow of water using only the Earth’s magnetic field or no field at all, to detect hyperpolarized xenon gas (but without analyzing chemical states), and in other applications. The next frontier is chemical analysis.

“No matter how sensitive your detector or how polarized your samples, you can’t detect chemical shifts in a zero field,” Budker says. “But there has always been another signal in NMR that can be used for chemical analysis – it’s just that it is usually so weak compared to chemical shifts, it has been the poor relative in the NMR family. It’s called J-coupling.”

Discovered in 1950 by the NMR pioneer Erwin Hahn and his graduate student, Donald Maxwell, J- coupling provides an interaction pathway between two protons (or other nuclei with spin), which is mediated by their associated electrons. The signature frequencies of these interactions, appearing in the NMR spectrum, can be used to determine the angle between chemical bonds and distances between the nuclei.

“You can even tell how many bonds separate the two spins,” Ledbetter says. “J-coupling reveals all that information.”

The resulting signals are highly specific and indicate just what chemical species is being observed. Moreover, as Hahn saw right away, while the signal can be modified by external magnetic fields, it does not vanish in their absence.