Taking NMR And MRI To The Nanoscale (C&EN) 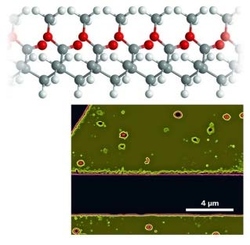 Understanding the inner workings of biology or materials science requires both structural and chemical knowledge, but current analysis techniques have limits: They may require large sample sizes, crystallization, or low temperatures, or they show structural features without chemical information—or the reverse. A new approach to nuclear magnetic resonance (NMR) spectroscopy provides a path to both chemical and three-dimensional structural information of nanoscale-sized samples at ambient temperature.

In traditional NMR spectroscopy, a sample is placed in a magnetic field. The spins of nuclei with odd numbers of protons and neutrons —commonly hydrogen and carbon-13—line up with or against the magnetic field. Slightly more of the nuclei line up with the field, leading to nuclear spin polarization. The polarization is measured by exciting the nuclei with a radio-frequency pulse and detecting the energy they emit. The medical technique magnetic resonance imaging (MRI) works similarly.

The conventional NMR or MRI detector is an electrical coil, and that’s been a limiting factor in reducing sample scales. “It just isn’t sensitive enough to go below the micrometer scale,” says Daniel Rugar, manager of nanoscale studies at IBM’s Almaden Research Center in San Jose, Calif. Rugar led one of two separate groups that reported similar nanoscale NMR techniques in Science (DOI: 10.1126/science.1231540 and 10.1126/science.1231675).

To downscale NMR, both groups used a detector made of diamond with a site defect called a single nitrogen-vacancy (NV) center, in which a nitrogen atom and a lattice hole replace two adjacent carbon atoms. Prior work had determined that NV centers are sensitive to the internal magnetic fields of the diamond. The new research demonstrates that the fluorescence of such centers can be used to detect magnetic fields emanating from just outside the diamond. Both groups were able to use NV centers to detect nuclear polarization of hydrogens in poly(methyl methacrylate) with a sample volume lower limit of about (5 nm)3. Further development is necessary to extract structural information.

Unlike conventional NMR or MRI, the NV technique does not need an external magnetic field. Because of the relatively small number of atoms in nanosized samples, the nuclear spins are not in perfect equilibrium and so are naturally polarized, says Friedemann Reinhard, a researcher at the University of Stuttgart’s Third Physics Institute, in Germany, who led the second nanoscale NMR group. The magnetic state of NV centers changes in response to the nuclear polarization of the sample.

Although researchers had predicted that NV centers could be used to detect NMR signals from small volumes, “it is very exciting to see work in both these papers that clearly shows it can really be done,” says Lyndon Emsley, scientific director of the European Centre for High Field NMR, in Lyon, France.

On the biology side, the technique could determine structures of proteins that cannot be crystallized or could identify different conformations of individual proteins, Rugar elaborates. It also opens the door to performing NMR of biomolecules in living cells.

For materials science, transistors will soon have dimensions of tens of nanometers or smaller, Reinhard notes. At that point, the identity or position of single atoms may be key to performance. Nanoscale NMR will enable determination of subsurface chemical composition, he says.