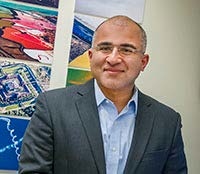 The International Society of Magnetic Resonance (ISMAR) will award the first Anatole Abragam Prize to Vikram Bajaj, a researcher in the Alex Pines lab, during the opening session of the ISMAR Congress in Rio de Janeiro in May. The Abragam Prize is awarded every three years to an outstanding young scientist in the field of magnetic resonance.

Anatole Abragam made seminal contributions to both NMR and EPR and was a recipient of the ISMAR Prize and a Fellow of ISMAR. In addition to his contributions to science, fostering science and people in science was clearly in his heart. With this in mind, ISMAR has established an award for young investigators that will bear the title Anatole Abragam Prize. The award aims to recognize and foster outstanding young people at a typically very important point of their career.