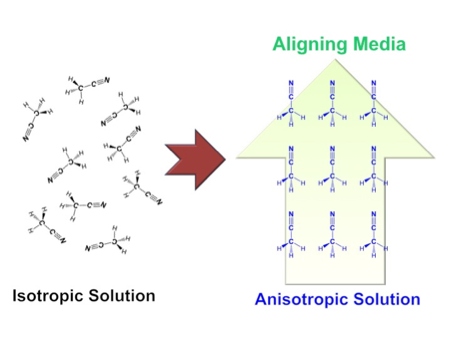 It is well known from high-field NMR that liquid state spectra exhibit sharp, well-resolved features due to the rapid reorientation of molecules. This reorientation, on a timescale much shorter than any other interaction in the spin system, effectively replaces all terms in the spin Hamiltonian with their average value. Completely anisotropic interactions, such as the dipole-dipole interaction and parts of the J-coupling tensor, then average to zero. Also known from high-field studies, if the reorientation of the molecules is not isotropic, then these anisotropic interactions are recovered to an extent proportional to the order parameter of the molecules. Due to the anisotropic nature of these couplings, they are inherently sensitive to the geometry of the molecule and as such may have applications to shape-sensitive molecular sensors. Present work involves the study of small molecules in stretched gels. Gels made of crosslinked poly(vinyl acetate) are swelled in confined tubes to induce a uniaxial stretching of the gel. Acetonitrile, chosen as a model 13CH3 spin system, is then partially oriented in the gel. At zero magnetic field, this poses a novel situation: the dominant term in the Hamiltonian is the isotropic J-coupling while perturbations are induced by the anistropic residual dipolar and J-couplings. The response of the zero-field NMR spectrum of the 13CH3 system to changes in order parameter and applied magnetic fields are currently being studied. A combination of numerical simulations and analytical theories will elucidate the spin physics at play.