In conventional NMR, large high-field superconducting magnets are used to increase the polarization of nuclear spins and to increase the sensitivity of inductive detection.  Since inductive detection is sensitive to the first time derivative of the magnetic flux, its sensitivity scales with the detected frequency, which increases with the strength of the applied magnetic field. Unfortunately, the use of these large magnets also increases the cost and limits the portability of NMR instrumentation. In order to move away from high magnetic fields and to overcome this cost in SNR, either hyperpolarization techniques and/or more sensitive detection methods are required.

We are primarily interested in using optical methods to enhance the sensitivity and resolution of NMR detection from low to zero magnetic field.  Compared to inductive detection methods, optical detection is more sensitive, has a higher detection bandwidth at low field and can be used to detect smaller ensembles of nuclear spins.  Along with leading to more portable instrumentation, optical detection methods provide a means for investigating the statistical polarization produced by very small ensembles of spins (10^4) (1) as well as magnetic resonance phenomena at low field (2); Optically pumped rubidium alkali vapor magnetometers and nitrogen-vacancy (NV) diamond magnetometers both achieve significant magnetic field sensitivities and in the case of NV diamond magnetometers, can be used to detect nuclear spins within nm^3 volumes (3).

The valence electron of rubidium alkali atoms is optically pumped through resonant absorption of circularly polarized light.  Once polarized, the presence of a small magnetic field will rotate the atomic spin vector orientation. The state of the atoms’ polarization is then measured by transmission or polarization rotation of a probe laser. The best sensitivity achieved using an alkali vapor magnetometer is 1 fT/√Hz, with projected sensitivity limits below 10 aT/√Hz (4).  Alkali vapor magnetometers have been used to measure geomagnetic fields, to measure magnetic fields from the heart and brain, and also for magnetic microscopy. 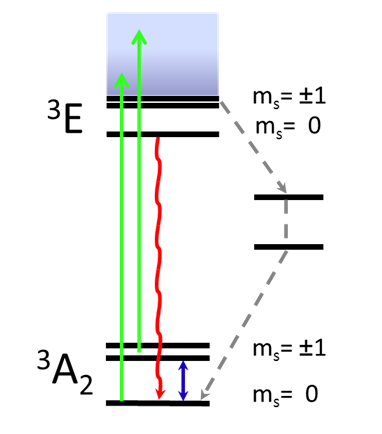 The NV center is a triplet state system that is optically pumped through a spin-dependent intersystem crossing pathway, a dark state.  Due to spin-orbit coupling, the triplet E states spin +1 and spin -1 can transform as singlet A, but this is not the case for the triplet E spin 0 state. This leads to enhanced spin polarization in the spin 0 state as indicated on the figure at left.  As a result of this crossing into a dark state, the NV center exhibits spin-dependent fluorescence. The presence of an oscillating magnetic field will result in a modulation in the +1 and -1 levels and when a fixed microwave source is applied resonant to the ms=0-->+/-1 transition it also results in a modulation of the detected fluorescence.  The amplitude of this modulation is related to the local magnetic field experienced by the NV center. The sensitivity of an ensemble of NV centers has been shown to be in the nT/√Hz (5) range with a projected sensitivity of fT/√Hz (6). Single NV centers have been used to detect small ensembles of nuclear spins (producing nT fields) and for the high resolution mapping of magnetic field gradients (7).

Optically detected magnetic resonance has been explored in the lab since the early 1970's when Breiland, Harris and Pines first demonstrated optical detection of electron precession and electron spin echoes by monitoring the phosphorecence of excited triplet states(8). ODMR has since been used to study the polarization of nuclear spins in semiconductors and also for direct detection of local magnetic fields (9).   More recently, with alkali vapor magnetometers, we have obtained relaxometry measurements at earth's field and have obtained zero-field NMR spectra via optical detection methods (10).

Detection of an NMR signal with an alkali vapor magnetometer was first demonstrated at Princeton by Savukov and Romalis (11). Here they detected an NMR signal from water and also detected less than 10^13 Xe atoms. Since then, this work has been additionally explored by many others, including the Pines lab. In collaboration with the John Kitching (NIST), these magnetometers have been miniaturized and used to remotely detect NMR (12). Most recently we have obtained spectra of J-couplings at zero-field, spectra that provide rich amount of information about the nuclear couplings in molecules.

Due to their favorable spin properties (long coherence times ~ms, optically addressable spin states), NV centers have been studied extensively in the past few decades. The luminsecent properties and associated EPR spectra of NV centers were first explored by Davies and Hammer (13).  Manson et al. characterized the NV center more throughly, gaining insight in the electronic energy levels and rates associated with its polarization (14). Using NV as a highly sensitive magnetometer and high resolution magnetic field sensor was first proposed by Taylor in 2008 (15) and later demonstrated by Rugar (1) and Acosta (17). The Pines lab has recently characterized the magnetic field detection bandwidth of and ensemble of NVs as well as their use as polarizing agents for NMR.