NMR experiments rely on creating a difference in population of nuclear spin energy levels, such that the net magnetic field they produce may be detected. This polarization, as it is called, is most commonly induced thermally by applying strong magnetic fields to establish an energetic preference for spins aligned with or against the applied field. Current magnetic resonance technologies have pushed towards increasingly stronger fields in order to overcome inherently poor nuclear polarization at thermal equilibrium, which remains as a limitation to sensitivity and scope of the capabilities of magnetic resonance. Even the most sophisticated instruments can achieve polarizations no greater than 0.01%, and such gains in sensitivity are nearly negated by the cost and impracticality of the resulting instruments. For this reason our group has focused part of its work on developing practical methods of producing nonequilibrium polarization – or hyperpolarization – for signal enhancement in magnetic resonance methods. 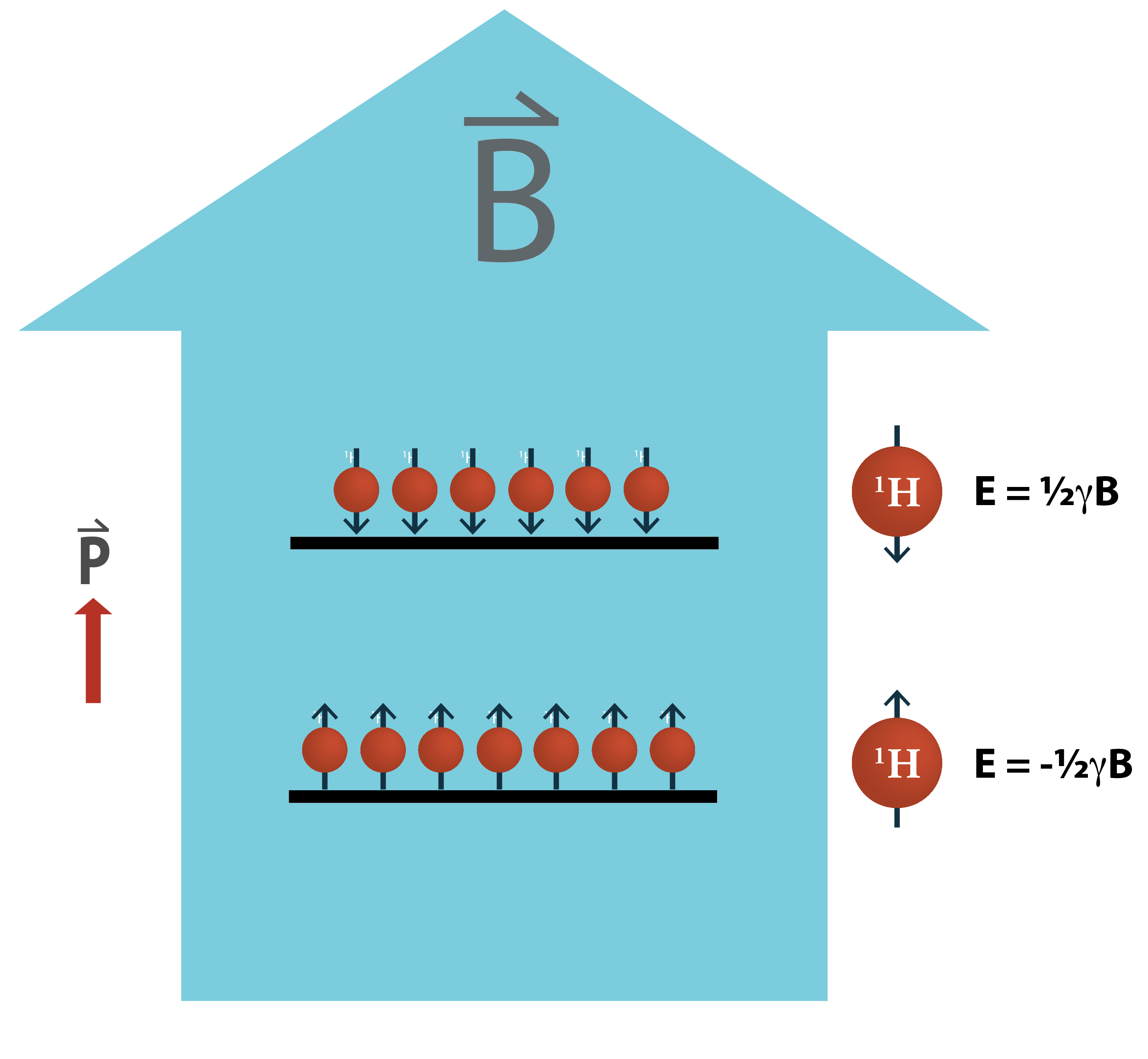 A number of elegant solutions have been presented for hyperpolarizing nuclei either completely or on the order of parts per hundred rather than parts per million. These solutions generally transfer polarization to a nuclear ensemble from systems that can be easily polarized, using the interactions that couple the two. Due to their ease of polarization by magnetic fields, optical illumination, or chemical reaction, current sources for polarization transfer are electrons in solid-state systems and organic radicals, gaseous alkali atoms, and parahydrogen.

Alkali metal atoms are characterized by a single valence electron whose spin state is strongly coupled to the nuclear spin. By imparting the angular momentum of circularly polarized light to the electron during promotion to an excited electronic state, the spin state of the electron, and therefore the atom, may be selected (1). It was then demonstrated that polarization can be transferred to noble gas atoms such as Xenon-129 and Helium-3 during spin-exchange collisions of gaseous atoms (2). Our group currently applies hyperpolarized Xenon-129 for targeted cellular imaging as well as remotely detected imaging for chemical analysis.

Another example is the nitrogen-vacancy (NV-) center, which is an electronic defect in diamond with total spin equal to 1. Upon optical excitation, the triplet spin state preferentially relaxes through intersystem crossing to the ground state, resulting in polarization to the 0 spin state with ~80% efficiency. This means that by simply pumping the NV- center with green light, the system can be nearly completely polarized to the spin-0 state. 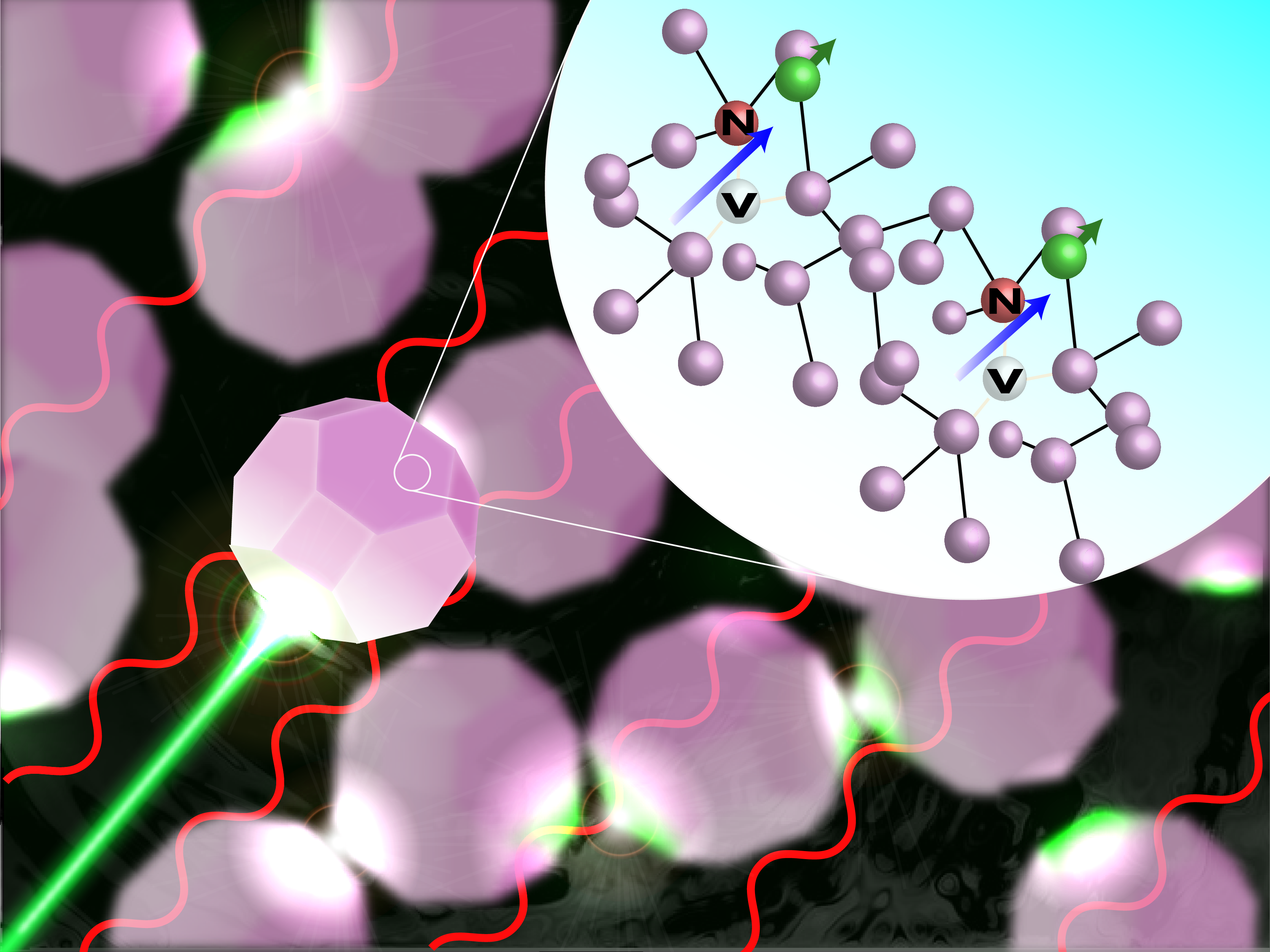 Lastly, the symmetry of singlet states such as parahydrogen can be exploited to produce complete polarization in newly-formed bonds incorporating these systems, which can then be probed and manipulated for a number of purposes (3,4).

Because magnetic resonance techniques universally and fundamentally rely on adequate polarization, members of the field have worked towards the development of hyperpolarization methods for decades. Early work was focused on the development of a body of techniques referred to as dynamic nuclear polarization, which is now implemented in commercial systems for application to solids and solutions, surfaces, materials, as well as micro- and macromolecular biological systems (5-11). The Pines group has purposed these techniques of hyperpolarization – DNP, optically-pumped systems, and parahydrogen – for a number of applications. A few examples include photochemical DNP for time-resolved magnetic resonance imaging, the use of alkali vapor magnetometry and PHIP for chemical analysis at zero-field, and the NV defect for sensitive magnetometry.

We are currently exploring three different mechanisms for hyperpolarization. This includes polarization transfer from the nitrogen vacancy defect in diamond to other nuclear spins in the lattice, the development of a microfabricated Xenon polarizer capable of both hyperpolarizing Xenon and detecting encoded Xenon with increased sensitivity, and testing the breadth of the SABRE (Signal Amplification by Reversible Exchange) method with parahydrogen and different catalysts.  We also hope to transfer hyperpolarization to liquids.