Negatively charged nitrogen-vacancy (NV-) centers are point defects in the diamond lattice with unique properties that are favorable for use in ultra sensitive, high-resolution magnetometry. As indicated in the figure at right, the nitrogen-vacancy center consists of a nitrogen atom adjacent to a carbon vacancy with an electron spin state of 1.  The negatively charged NV center can be highly spin polarized via laser irradiation and exhibits extraordinarily long coherence times at room temperature (~1ms in Carbon 12 enriched sample). In addition, because of the small size of the sensor (~nm) it can be brought arbitrarily close to a sample leading to a significant increase in the magnitude of the detected field. When compared to inductive detection methods at low field, an ensemble of NV centers theoretically have significantly better sensitivity. This high sensitivity combined with high magnetic field resolution make the NV center an ideal sensor to perform high-resolution NMR experiments at low field. Our goal is to use an ensemble of these NV centers for micron resolution nuclear magnetic resonance spectroscopy at zero and low magnetic fields, particularly in microfluidic applications.

NV centers exhibit a broadband absorption spectrum (460-638nm) with a zero phonon line at 637nm. Upon 532nm laser irradiation, NV centers fluoresce at 637nm. Due to spin dependent decay pathways, the intensity of this fluorescence is dependent on the state of the NV center immediately before the laser excitation. This state is affected by the local magnetic field that the NV center experiences via the Zeeman interaction. Using a combination of microwave and laser pulses, measurements of the fluorescence intensity before and after the applied pulses can be used to probe small magnetic fields. 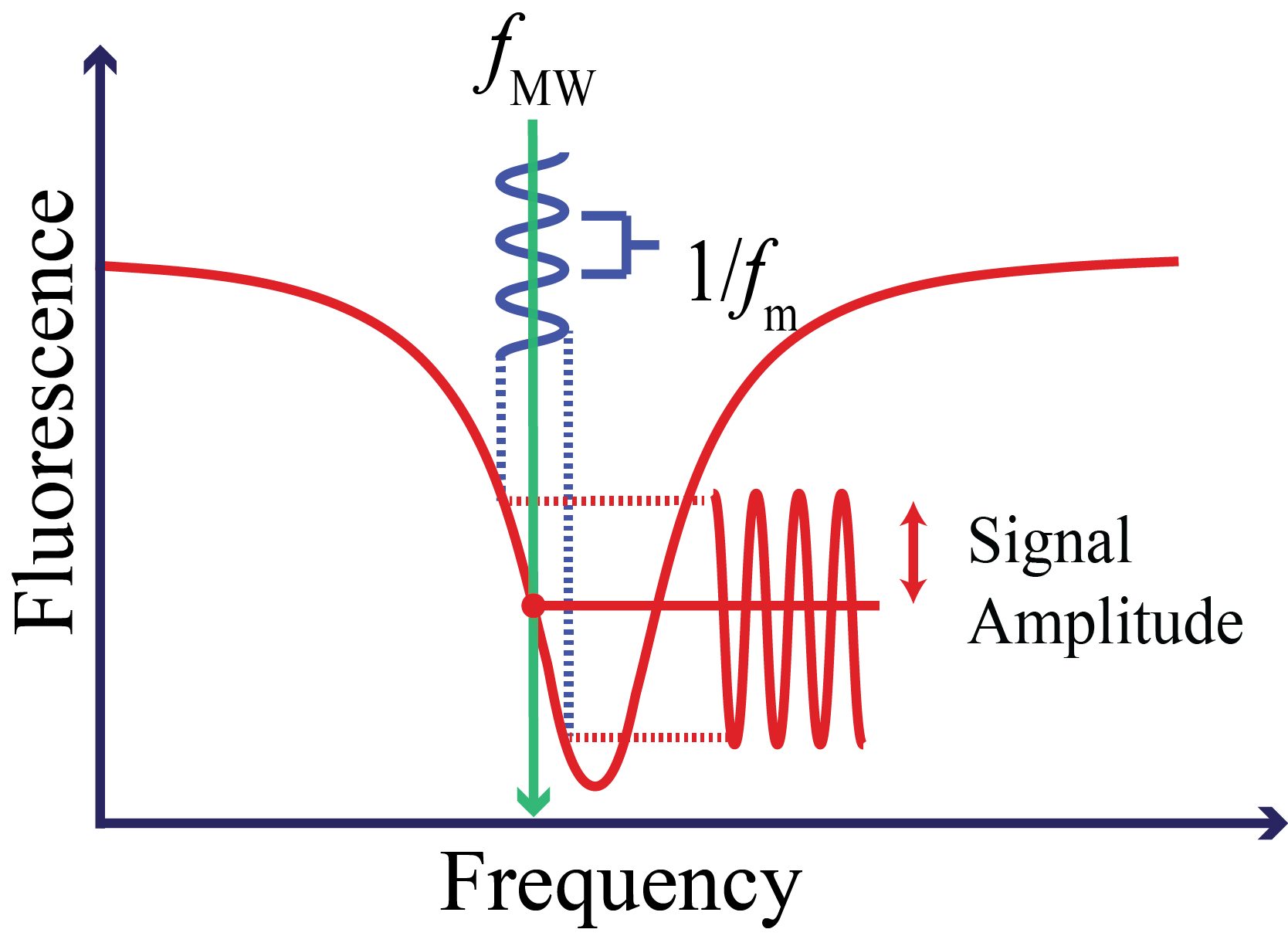 We've recently measured the detection bandwidth and magnetic field sensitivity of an ensemble of these centers using a continuous wave gradiometer method. Here, as indicated in the figure above, the NV center is continuously irradiated with a laser and with a fixed microwave frequency.  Any fluctuations in the magnetic field result in a measurable fluctuation in the detected fluorescence. 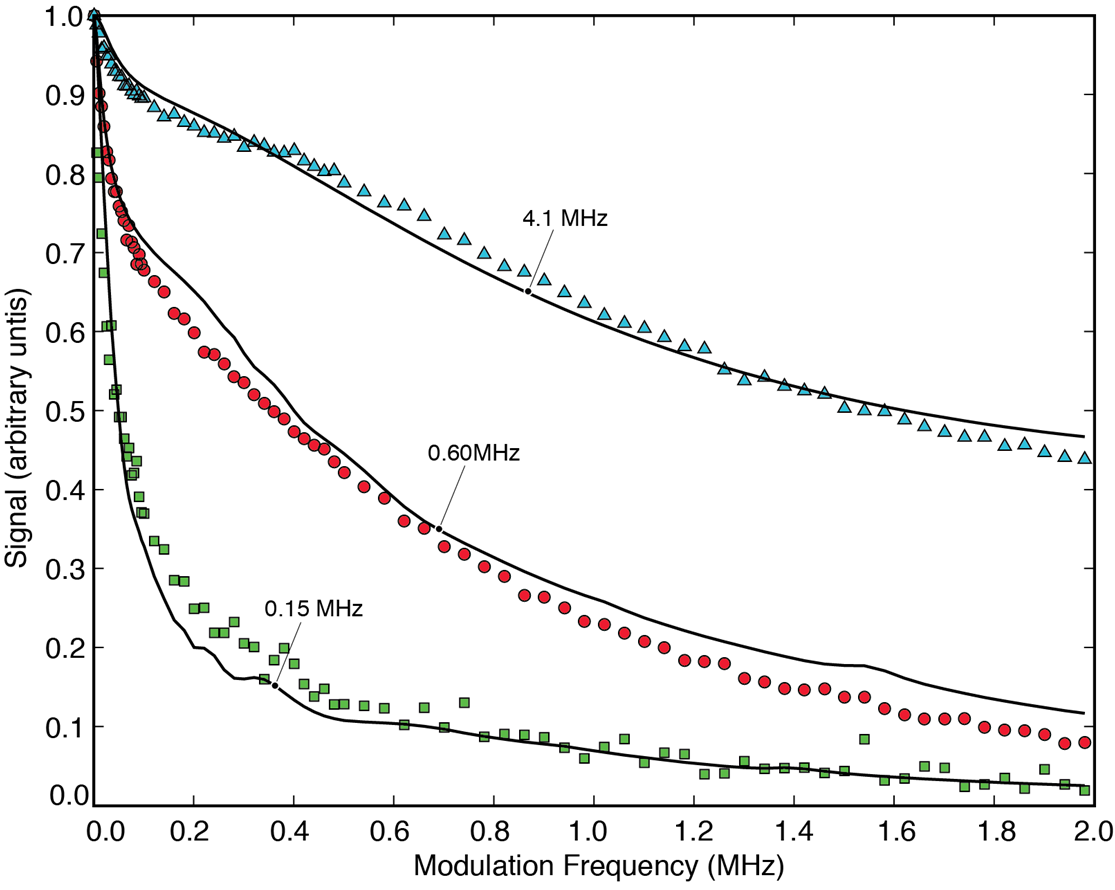 The graph above indicates the bandwidth of the NV ensemble magnetometer at three different applied microwave powers, while the graph below indicates the signal from a 94Hz 600pT magnetic field. 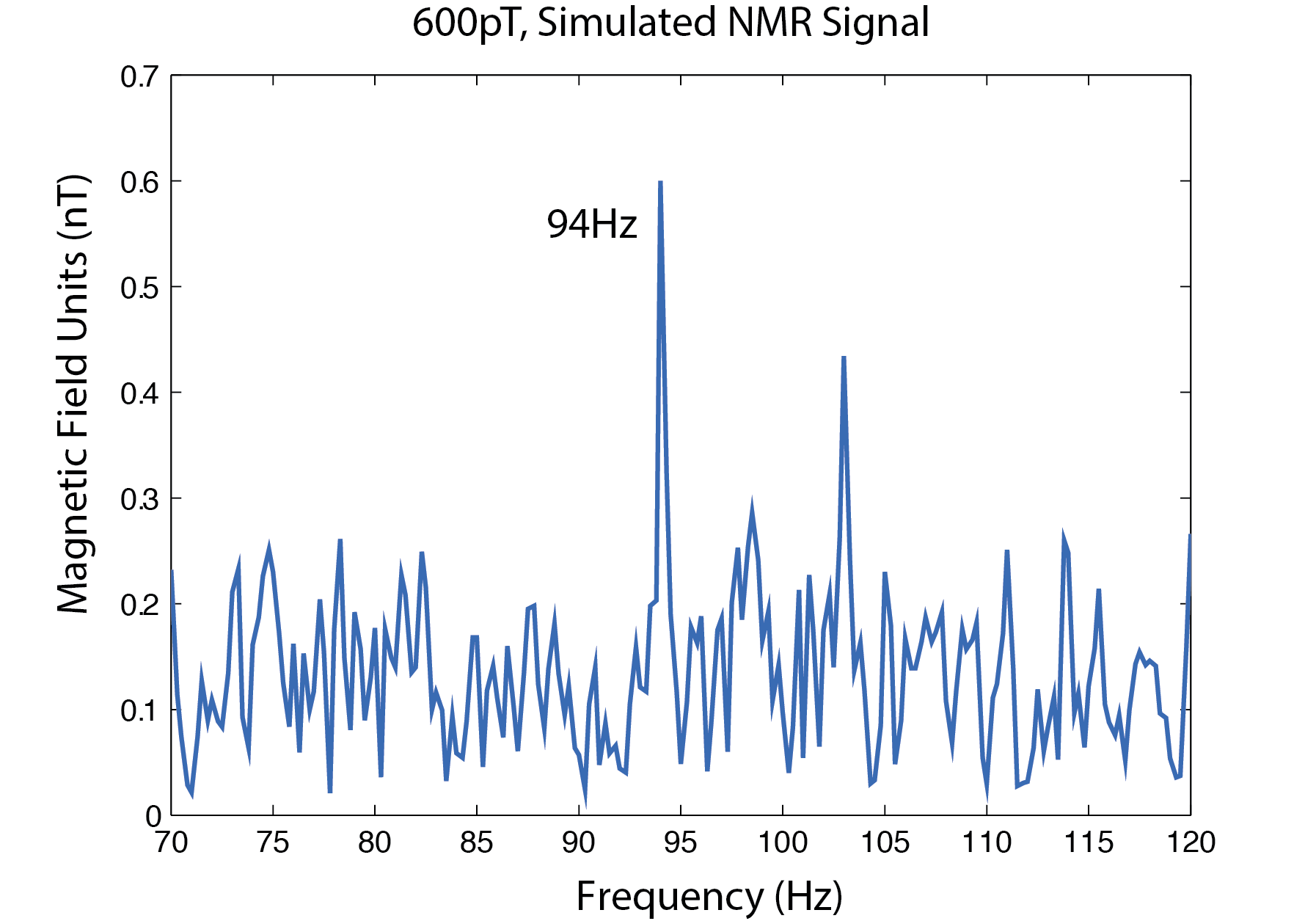 Our present magnetometry projects include remote detection of nuclear spins with nitrogen vacancy centers and measurement of nuclear spin precession using an ensemble of NV centers.

The figure above shows one of the configurations used for remote detection experiments with nitrogen vacancy centers.